Ladies of the Night

I had n`t planned to trap last night (Tues, 22/8) but realising that the cloudy conditions and rather warm SE breeze could be profitable in moth terms, decided at 10.00pm to put out one trap, an MV, which was placed on the flat roof at the back of the house.
Soon, the moths were coming in thick and fast and I was up and down the access ladder on many occasions. Quite early on, two large moths `thudded` against the plastic sides of the trap and settled on the flat roof; a third arrived a few minutes later and entered the trap. I had to go back into the house to find a container large enough to hold them. They were three old ladies, two quite scruffy (especially the one which entered the trap, where it was disturbed by restless LYUs), with the third more decently attired. Old lady moths are said to be not so often attracted to light traps and three is the most that I`ve caught.
The trap, this morning, was again quite mundane with a lot of worn moths, presumably disturbed by the ill-behaved gangs of LYUs. Indeed, the more interesting moths caught were potted as they arrived last night - small rufous and four-spotted footman for example, which made me think whether I miss a lot of species by my usual method of setting up the trap and just leaving it until the next morning. Last night, the `wait and watch` tactic (until midnight) was vaguely interesting. The only migrants were a few silver y`s. 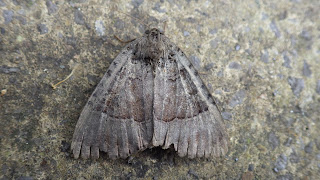 Above: the least worn old lady and, below, the same moth with one of the more battered individuals. 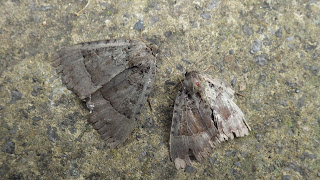