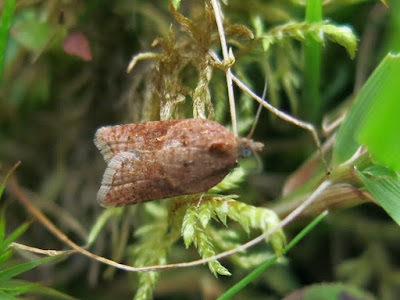 I spent 15 minutes on the northern slopes of Mynydd Llanllwni on my way back from a day's fieldwork in Ceredigion.  10 species of moth were disturbed from the heather and bilberry, including 5 Twin-spot Carpet (no Striped Twin-spot unfortunately), 2 Udea ferrugalis, 3 late Scoparia ambigualis and a couple of Eupoecilia angustana.  Surprise highlight were what I initially thought were two species of Acleris: a grey & brown one that looked like a tiny pointy-winged A. laterana and a slightly larger warm brown one.  Checking revealed that these were male and female Acleris caledoniana: a bilberry feeder that has just one previous Carmarthenshire record, from the Carmarthen Fans in September 2014.  I have no doubt that this species would be elsewhere in our uplands if people looked for it on warm afternoons. 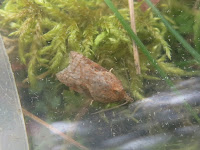 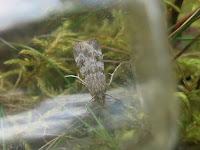 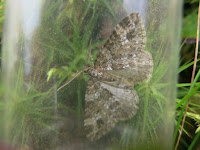