An influx of grandchildren prevented me from trapping last weekend, but I did put a large actinic trap out on Monday night and recorded 71 moths of 39 species.  Like Steve, nothing unusual, but several FFYs including Swallowtail Moth and Slender Brindle, and second occurrences (SFYs) of Scalloped Shell and Cloaked Carpet.  And only one Large Yellow Underwing!  Maybe they're having an off-year.

A most unwelcome visitor turned up on the wall of the bungalow last week, and I managed to inflict a severe headache before it did any harm: 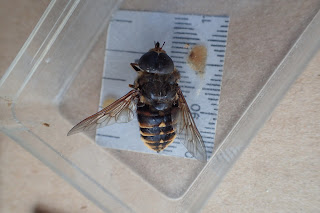 It's only the third I've seen here in nine years, although the horses have probably encountered more. Unfortunately there are plenty of its smaller cousin, the Cleg, around just now, and they are a real pest to man and beast - if only they would have an off-year!
Posted by Chris Handoll