Yesterday evening (22/7), I paid an hour`s visit to Morfa-uchaf, a small area of sandy grassland and saltmarsh on the Tywi estuary, just north of Ferryside. It is a site known to Sam and, a few years back, I recall him finding a scarce moss here - Bryum warneum (I think).
I had been hoping to check stands of sea purslane for Coleophora (but that plant was almost absent) and also to `keep an eye out` for any late rosy waves (none were seen). There is a different saltmarsh plant assemblage here - basically a more rushy one, with an absence (or almost so) of many species found previously at North Dock and Pembrey.
There are stands of alder, admixed with occasional Salix fragilis and S. viminalis, the latter two willows having established themselves from stem fragments washed downstream by the Tywi - `natural cuttings`, as it were.

Above: looking seawards, with Llansteffan on the right-hand side. Click on pic to enlarge.

About ten or so moth species were noted, with the quite distinctive `grass-moth` Agriphia latistria perhaps being the most interesting, though some saltmarsh Bactra may prove to be robustana. A rush veneer was flushed from dry grassland and Eucosma campoliliana was netted at ragwort (its host plant). A single Argyresthia goedartella was spotted on an alder leaf. Indeed, checking of leaves proved quite profitable (see below) and Oxycera trilineata (a soldier-fly) was also discovered by that activity. 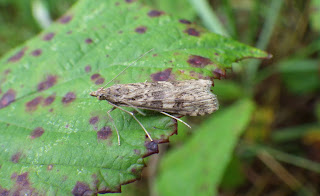 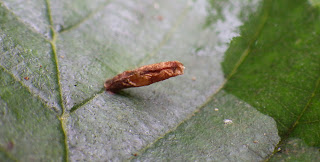 Above: also on alder was this Coleophora case. Several species occur on this tree, but I don`t know if this case is identifiable. 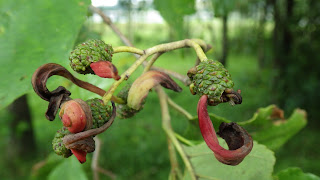 Above: more spectacular and easier to identify is this gall, caused by a fungal plant pathogen - Taphria alni.

Above: I`m not sure if this mine is that of Chrysoethia sexguttella.

Above: returning home, I could n`t resist taking this photo looking out across Carmarthen Bay to west Gower. Note the sinister sea-serpent form of Worm`s Head at its western termination and also the broad expanse of the Lower Gwendraeth in the middle of the photo, with Pembrey Forest seawards of it. These coastal grazing levels are perhaps one of the best surviving areas of that particular habitat in Wales. Again, click on pic to enlarge.
Posted by Ian Morgan