I've had a large actinic trap shining brightly these last two nights but the results couldn't compare with Wednesday night's 'bonanza'.  Conditions were slightly less favourable, cooler at least, although Steve's result suggests that the brighter MV lamp might have something to do with it.  Whatever, last night's trapping produced 73 moths of 43 species.  Notable FFYs were Barred Red, Dotted Clay, and Mompha propinquella:

Also of interest was a Sharp-angled Carpet, if only because the same individual has turned up in a trap before, to wit the MV on Wednesday night: 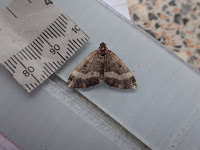 Something has lodged on the left forewing and caused a constriction, and it seems unlikely that the same fault would occur on two individuals.  Trapping the same moth more than once may well occur quite frequently, but on most instances it's not possible to tell; on this occasion it is, so rightly or wrongly I've only made one entry on the record sheet.
Posted by Chris Handoll