On a wild goose(foot) chase...

Twenty years ago, various chenopods - oraches and goosefoots - were frequent on brownfield sites in and around Llanelli and even just a decade ago, I was able to catch decent numbers of nutmegs at a site just east of Burry Port.
It was to Burry Port that I went late this afternoon to search for the above plants and, in turn, for any leaf-mines of Chrysoethia sexguttella larvae feeding on the leaves. I found a few strandline Atriplex but none on terrestrial habitat.
Whilst searching the `West Dock` (old scouring basin) adjacent to Burry Port harbour, I noticed some musk mallows and went to inspect them for any sign of the eponymous mallow moth, but I found none. Checking at home later, it seems that I was a bit late for that task, the caterpillars having pupated by now.
I did, however, note that some flower heads looked discoloured and, upon carefully opening up a couple of them, found a small caterpillar in each. They appear morphologically very close in appearance to the Chrysoethia larvae that I was unsuccessfully searching for on goosefoots, ie they may be gelechiids. A potential contender is the `hollyhock seed moth` Pexicopia malvella, which is known a very short distance away, across the Burry Inlet on the upper saltmarshes, where it utilises marsh mallows. 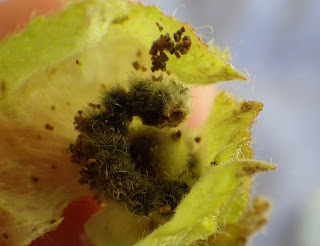 Above: close-up of the larval case in which the caterpillar was residing (also note the nearby frass). The case was made of seed cases and offered good camouflage. 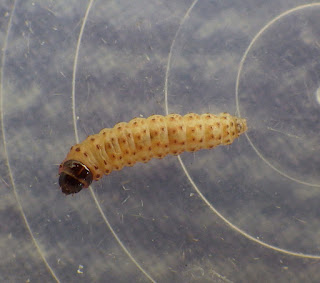 Above: the caterpillar.
Posted by Ian Morgan