The lane at Cwmllwyd is described by the BBNP as an ancient trackway: it's about a hundred metres long, has no imported surfacing material (just grasses and a wide range of wildflowers throughout the seasons, along with mower-damaging stones from the bedrock that was leveled for horse-drawn equipment several hundreds of years ago) and has somewhat diverse hedgerows on each side, with some mature trees and plenty of shrubs. It can be a very good site for moths, from time to time. Last week there were clouds of Pseudargyrotoza conwagana disturbed by the dogs while passing through to look at the sheep - but none of these moths today. Instead, there were good numbers of Argyresthia bonnetella; certainly dozens of them. 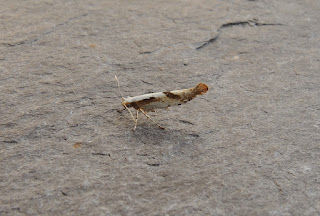