Following the sweltering daytime temperature (14 June 2017), with the lightest of winds, I could not resist revisiting the mountain for the first time this year with the MV trap. This meant also carrying a generator, choke unit, net, two trekking poles, head light, collecting pots, sit mat und so weiter. All this kit had to be stashed in a heavy duty pack frame acquired for the task. I am able to drive a goodly way up the hill (more or less authorised by the Brecon Beacons National Park following their interest in the discovery of a colony of Grey Scalloped Bars a couple of years ago), but after that it's all legwork. I decided to check the weight of the kit before setting off, by standing on bathroom scales with the pack on my back - this was not entirely successful, as the scales bottomed out at 19 stone! The pack weight, therefore, was in excess of  65 lbs. This is far too much for an old geezer (as we say in Wales) in his seventieth year. Further thought will have to address this issue before I do this again.

It's only a kilometer, or so, to the trap site from the car and it's more or less level - that is to say, it goes up and down like a switchback, but ends at about the same elevation. That short distance took me half an hour, through heather interspersed with boggy flushes and over a couple of ridges. That's not too bad, I think, but it took 45 minutes on the return journey in the dark, checking the compass every few yards.....

At the trap site, I found that cold wind was funneling down the ravine far more strongly than I had expected and this dissuaded most of the most interesting mountain macromoths from attending. Disappointing. This meant that moth of the night was, in fact, a micro! I can count the number of times I've said that on the hands of one arm! 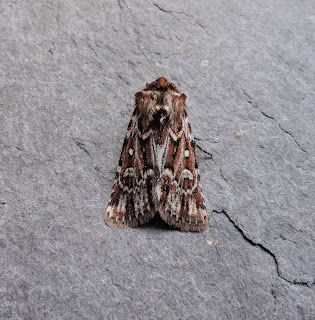 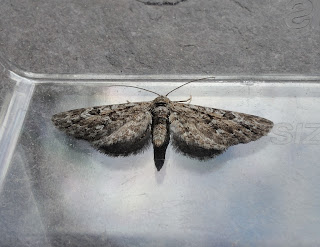 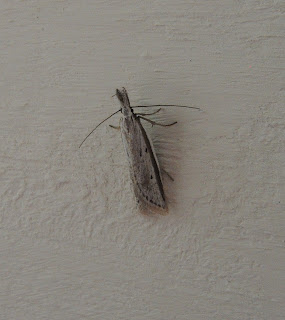 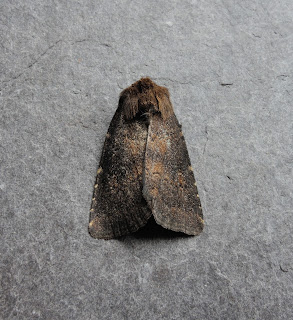 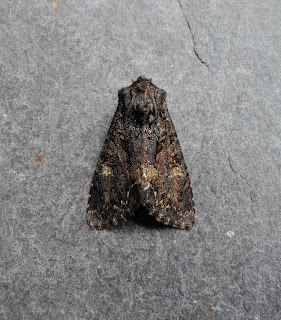