Before setting out a couple of traps at Troserch Woods last night (17/6, see earlier post), I re-visited the saltmarshes at Llangennech, on the eastern bank of the Afon Llwchwr, which demarcates Carmarthenshire from Glamorgan on the other side. Several micro records of interest were made, with one - if confirmed - will be new for Carmarthenshire.

Above: a general view of the site, looking east towards Glamorgan. 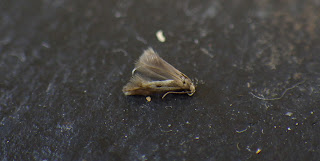 Above:  the suggested possible Elachista scirpi. Note the general colouration and the black spot on the wing (click on pic to enlarge). I also have several live specimens, but they won`t keep still for photos. IF it is this species, there`s no reason why it does n`t occur in Glamorgan too, on the banks of the Llwchwr opposite or in the Burry Inlet (which is a continuum of the Llwchwr).
Note the precautionary caveats above, but I`ve examined the live individuals - when they are briefly still - and they do look like scirpi. I`d be interested to hear the views of more learned moth`ers. If it is indeed the suggested species it is obviously out at present and it would be a good time to sweep upper saltmarsh rushes elsewhere.

I`ve added the photo below of a live individual - it`s the best I can manage at present of these restless moths! 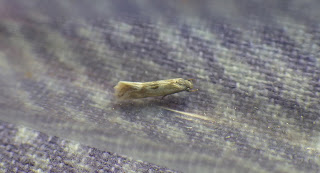 The size incidentally conforms with the scale bar given in Chris Manley`s book (p 109). This individual, with the strong, black bar has the look of albidella, but none of its larval food-plants are present (Eriophorum, certain Carex spp, Eleocharis or Trichophorum) whereas these Llangennech individuals were on Juncus gerardii.
Posted by Ian Morgan