On the coast east of Burry Port.

I left out three actinics on the coast just east of Burry Port last night (26/6), one in a dune hollow, one in an open pine/mixed deciduous wood and the third at the edge of a planting dominated by aspen. Irritatingly, the empty second trap must have failed soon after I left (when it was certainly shining bright) - I`m `on the case`!
There were decent catches in both of the working traps at first light - c 50 (in the dunes trap) and c 35 species (aspen wood trap) respectively. The moths included species to be expected, as well as the odd unexpected species; there were no migrants.

Above: a view of the `dune trap site`; the failed second trap was in the pines on the skyline, whilst the third trap was among aspen etc deeper in the planted woodland. 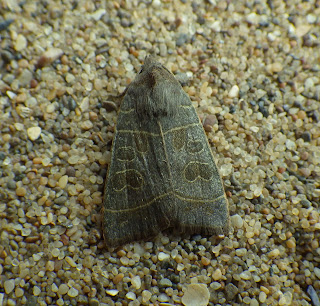 Above: this olive was a nice surprise. It is much less frequent (only 21 Carms records to 2016) than the similar double kidney (172 records). 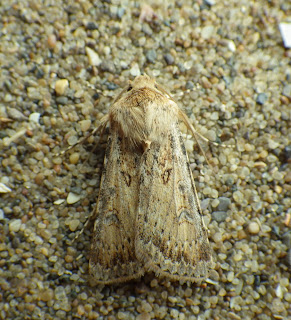 Above: four sand darts were in the trap. 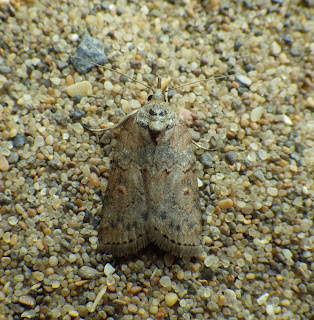 Above: a surprise was this oak nycteoline  - there are no oaks nearby. 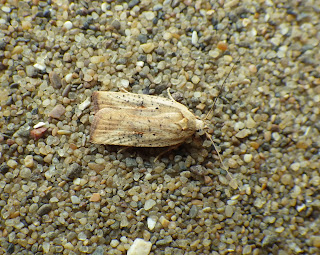 Above: I`ve confused myself with this Agonopterix sp. Any advice please? 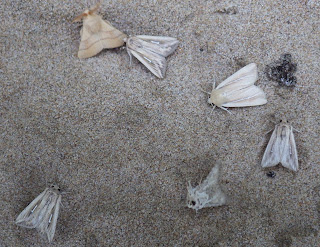 Above: by this stage I was running late and a fine drizzle had started (it later stopped). This is just a quick shot of the contents of one of the egg cartons after it had been `banged out`onto the sand. It includes three l-album wainscots (of which I had nine in total), a shore wainscot (top right), a single lackey  (which totaled 16) `warming up` and a sand dart on the verge of `taking off`.

The other functioning trap was located at the edge of a stand of aspens, but no aspen associates were caught. 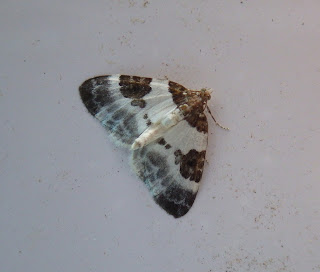 Above and below: this blue-bordered carpet and the 2nd generation engrailed were both photographed on the vanes of the trap. 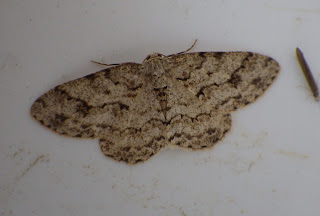 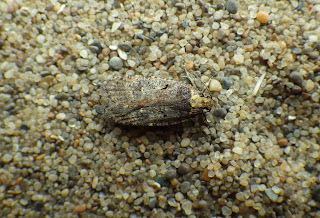 Above: I believe that this is Agonopterix conterminella as the thorax and tergulae (to the sides of the thorax) are the same colour. Please correct me if wrong.
Posted by Ian Morgan