As already remarked, lesser numbers than on Friday but Argyresthia cupressella once again in the trap and Udea olivalis was a FFY. 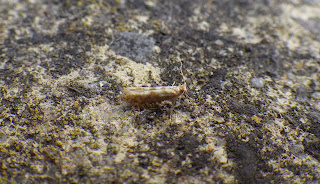 Above: having a good year - A. cupressella. A quite new colonist to Britain and associated with cypresses. 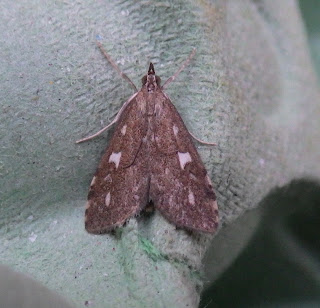 Above: Udea olivalis.
Incidentally, my `bumper moth crop` on Friday night was mostly from a mains actinic, rather than my MV - both had good numbers but the actinic had the better moths. However, this may be due to the trap design rather than the light source and also the traps`different positioning.
As can be seen from the Troserch Woods blog, the small and relatively weak-lighted battery actinics can yield good results though, more normally, numbers can be quite small.
Posted by Ian Morgan