On Monday evening (19/6), I took three battery-run actinics to a raised bog site near Pont Abraham, a heavily-damaged peat bog which formed in a topographical depression on the eastern side of a hill. Both the bog and the hill in medieval times formed part of an area put aside for the chase - a hunting `forest` - hence the name `Fforest` given to an adjoining landholding and the nearby village. Remember that `forest` in this context may, or may not, have been wooded.
Enough of landscape history - now the moths. I had originally intended to place two of the traps on the bog but it was such a palaver carrying the trap, battery and other gear though tangled willow/bramble scrub, across ditches and boggy hollows that only one was placed on the bog. The oppressive heat did n`t help either, making exertion really exhausting! The second trap was situated in an easy-to-access nearby clearing within planted woodland of various conifers, with larch predominating in the section overlooking the trap. The third trap was put at its intended site - a pathside oak/birch/sweet chestnut woodland with an understory of bilberry.

Above: the bog trap as left out for the night.
The bog has yielded some good moths for me in the past - heath and neglected rustics in late summer/early autumn and also the pyralid Pempelia palumbella, a heather-feeder, here at its only county station. On Monday the little actinic did me proud, holding some 45 species all told, though all three traps have some moths yet to be determined. They included striped wainscots, true-lover`s knots, map-winged swifts, northern spinach, Elachista albidella, Argyresthia brockella (a birch feeder - there`s plenty of invasive birches on the bog), Tinea trilotella etc...

Above: striped wainscot. The pink suffusion to the hind part of the wings that George mentioned recently can be clearly seen in this photo.

Above: Tinea trinotella, an inhabitant (as larvae) of birds` nests.

The `larch clearing` also had 44 species , though a different mix to that on the bog. Barred yellow, beautiful snout, northern spinach, green silver-lines were among the macros, but the micros provided the more interesting moths. Among the latter were a nice haul of the attractive Ptycholomoides aeriferana (10) and half-a-dozen of what may be Spilonota laricina which, if confirmed, will be a NCR for Carmarthenshire. Both are associated with larch.

Above: the `larch clearing`.

Above: What I think may possibly be Spilonota laricina (see p.49 of `Conifer Moths of the British Isles`).

Above: I`m unsure about this one (I have some candidates) - any suggestions please? Also from the `larch clearing` (note that there are other conifer spp. growing beyond the larches).

The third and last trap had 43 species (again a few awaiting i/d) and here many northern spinach, a scalloped hook-tip, and beautiful snouts were macro highlights, with Nematopogon sp, Eudonia delunella, Zeiraphera ratzburgiana and a solitary putative Spilonota laricina (this site is only about 30m away from the `larch site`. A light green-coloured pug was, on inspection, just a green pug rather than a bilberry pug which Sam has had at the very same site during a past daytime visit.

Above: Nematopogon sp. - metaxella due the length of the antennae? 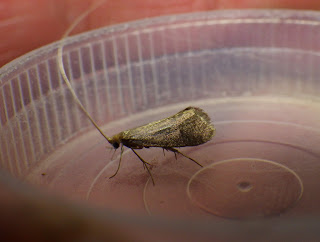 Above: an extra photo, showing a side view. It does seem to have a slight dark spot in the middle of the wing, suggesting metaxella?

All in all, a worthwhile night and boosting records from the underworked SN50. The results were aided by the hot overnight temperatures.