Warm, damp and with southerlies...

Ideal trapping weather. I suggested to some Carmarthenshire moth`ers that last night (11/5) would be a good night to trap and indeed it was, with c 40 species of macros in my garden traps, including three migrants (silver y x2, diamond-backed moth and rush veneer - the latter two are not macros). Tonight also looks good (south winds skirting the coast of Iberia and western France) for trapping - so don`t let the rain put you off!
There were few micros, but the macro list included many of the seasonal cast with an orange footman being the best. This species is known from Pembrey Forest (with also an early 2000s record from my Pwll garden), but it is the scarcest of the county`s footmen with only about half-dozen records or so. Not in the same league as George`s magnificent find at Pembrey, but an useful record nevertheless. I note that it is a rare species in Glamorgan too, with a similarly limited number of records. 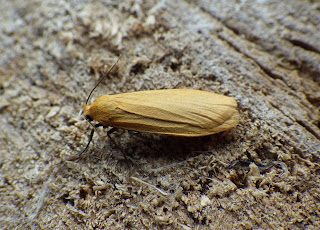 Above: orange footman at Pwll.