On my kitchen window...

I`ve hardly trapped of late, due to lack of time, tiredness or inclement weather, though I note that the weather tonight (Monday 22/5) looks favourable. So it was some compensation when, late yesterday afternoon, a tortricid appeared at my kitchen window which, luckily, I was able to catch.
At first I thought it might have been one of the chestnut-backed forms of Epinotia nisella but later examination of it when it had cooled down in my fridge, suggested Endothenia nigricostana, a species that feeds on hedge woundwort, a smelly labiate that certainly grows in my garden.
If it is nigricostana, there appears to be only three previous Carms records* (with a similar number cited in the Moths of Glamorgan). Click on the pic to enlarge.
* George has since kindly confirmed the i/d and I have replaced the previous photos with a better one. 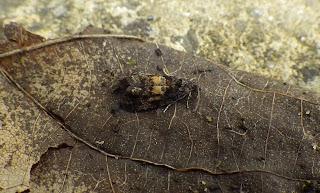