Yesterday I was joined by Judy Burroughs and Paul Gadsby for BC's second monitoring visit of the year at Pembrey Forest. Although it was warm the cloud was frustratingly stubborn, which made butterfly counts tricky but had the benefit of giving us some time to explore for caterpillars and day-flying moths.

Being a warm day there was plenty of moth activity, with hundreds of Anania fuscalis (always common at this site, but even more so than usual this year), Cauchas fibuella on Germander Speedwell flowers, a few Grass Rivulet, an unexpected female Muslin moth (flying of its own accord), a Beautiful Carpet and a single Anania funebris in an area of the site where I've not seen them before (the latter two were too flightly to photograph outside the pot). 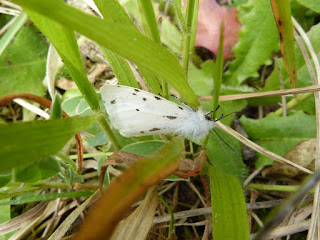 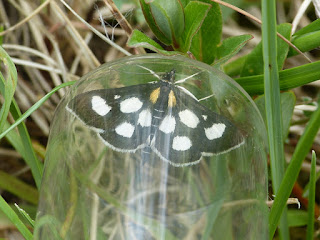 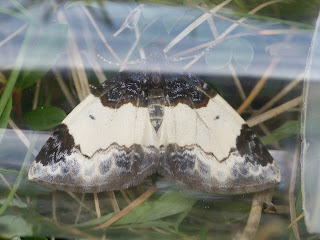 Searching sallow leaves for Puss Moth eggs didn't reveal any, but we did find a single, newly-hatched larva. 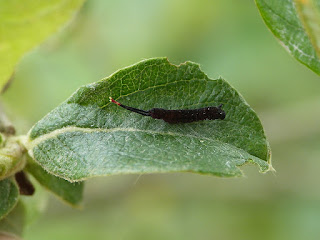 Also on sallow were several larval cases of Coleophora albidella. This is unusual among Coleophora species in that it eats right through the leaf rather than making the typical Coleophora mines - which makes them harder to find as you have to search for the cases themselves. The first I saw was completely by chance - I thought it was a pair of mating weevils, then a bird dropping, and it was only when I looked closer that I realised what it was. After I'd got my eye in, I found another three elsewhere on the site. It's an amazing-looking case made of silk, bits of leaf and adorned with hairs from the willow leaves.

According to Sam's 2016 list, this is a new species for Carms.

Among the butterflies was a Dark Green Fritillary larva (photo), an early Large Skipper, and singles of Marsh Fritillary (near the entrance to the bombing range) and Small Pearl-bordered Fritillary. Dingy Skipper numbers were pretty good, Grizzled Skipper seems to be past its peak now, and Small Blue numbers are still building. 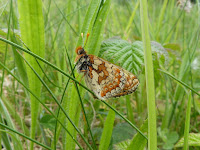