The small actinic trap attracted very few moths last night - 2 Hebrew Characters, a White Ermine and a Small Square-spot were the only ones to enter the trap, but resting outside it was a Lunar Thorn, a first for me here: 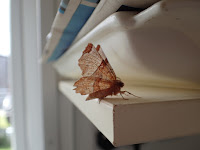 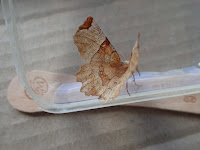 The porch light also attracted a few, including a small Pug (F/W 11mm) which I suspect is either Brindled or Oak-tree, probably the latter, but the markings aren't distinct enough to be sure.

Yesterday a mini-micro turned up in the woodshed, the first for a few weeks, a Mompha species I think, but not the usual M.divisella.  From the images I've found it most resembles M.subbistrigella, if so it's another first for me. 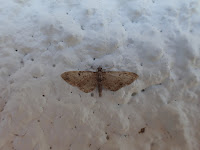 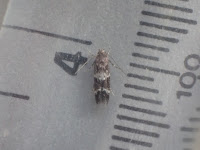