I just could n`t resist!

Because of a rather poor night last night (<25 species) at my home trap site (just the MV this time) and the forecasted heavy rain later this evening (28/5), I was not going to trap. But I`ve succumbed to temptation and put my MV out again. Tonight, I have not put the MV on the more visible flat-roof site, as puddling of rainwater there both spoils and drowns numerous moths, so it is simply placed on the garden path.
In spite of the promised heavy rain it is predicted to be quite windless and warm overnight. Secondly, my reading earlier of some of Jon Baker`s interesting write-ups in the Carms Moth Group Newsletters that were produced by him in the mid 2000s has inspired me to trap.
We`ll see what the morning will bring. Hopefully, `Pwll Passport Control` will intercept a migrant or two...well, perhaps! 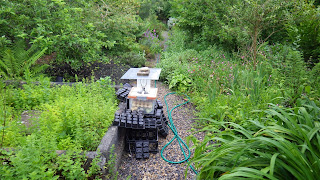 Above: the trap positioned with an extra large rain-guard on top in readiness for any deluge. Note that I`ve used plastic seed modules rather than egg trays due to the effect of rain on the latter.

Brief Postscript: The heavy rain did n`t materialise and it was dry all night! Whatever, the results were good this morning (c 60 spp.) and included two migrants - a rather light-coloured small mottled willow and a silver y. PPS. I`ve just found a diamond-back moth too, amongst the micros I collected for later inspection, and here`s the rather worn small mottled willow: 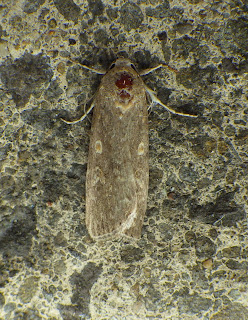 Privet hawk-moth was a FFY: 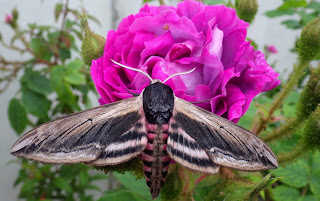 Above: privet hawk-moth showing its dimensions against the garden rose `William Lobb`.
Posted by Ian Morgan