Encouraged by the morning's catch and George's reported sighting of Cauchas fibulella on Speedwell flowers I decided to embark on a scrutiny of Veronica sp. flowers yesterday afternoon - there seems to be an abundance of it (Speedwell) this year, both in the garden and on the fringes of the paddocks. Nothing of interest was spotted initially, but I persevered and eventually spotted some small moths on a clump of Speedwell at the far side of the property: 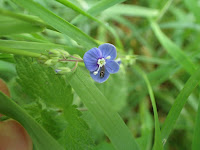 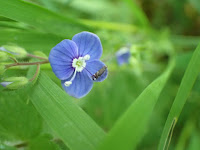 Sadly not C. fibulella, but a Glyphipterix species, almost certainly G. simpliciella.  I also saw the familiar Micropterix calthella on the same batch of flowers.  I have also been seeing this species regularly on the May flowers in the garden, but yesterday was the first sighting of M. aruncella: 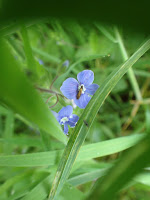 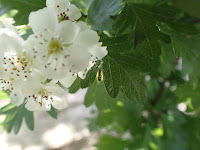 A footnote to yesterday morning's catch: the two female Muslin Moths remained static at the release point overnight, the only change this morning being  that they were accompanied by a clutch of 21 eggs. 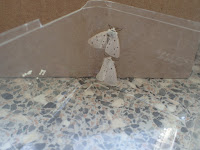 I shall certainly make an effort to hatch them out and release the offspring somewhere safe.
Posted by Chris Handoll