Coming to some ferns near you?

Vaughn Mathews made an important find recently when he spotted an individual of the micro-moth Pachyrhabda steropodes near Llandyfeisant Church in Dinefwr Castle Woods, Llandeilo, followed, only a few days ago, by another sighting, this time of many individuals, along a footpath at the southern, riverside edge of Llandeilo town.
Pachyrhabda was discovered, new to Britain, at Aberglasney Gardens by Jon Baker back in 2005, it being an Australasian species thought to have been brought in with a consignment of exotic ferns. It was also photographed by Chris Manley at this site a few years ago (see his superb photo at : http://gmrg-vc41moths.blogspot.co.uk/2014/04/aberglasney-gardens_23.html); Vaughn also took a decent photo recently (scroll down to his earlier posting).
After Vaughn`s find of c 100 individuals early on Tuesday evening, I ventured yesterday (3/5) afternoon to have a look myself. For some reason, I had a subconscious perception that they were larger than they proved to be, even though there is a scale bar indicating size next to the photograph in Chris Manley`s British Moths (2nd Edition), 2015. The first one I caught, I did n`t recognise and it was duly potted, thinking that I`d captured an Argyresthia sp. Some gentle sweeping of bankside ferns a few seconds later flushed more of these tiny moths which, to my eyes, reminded me of leafhoppers in flight and examination of one then made me realise that I`d actually caught Pachyrhabda. In all, I must have flushed/caught 30+ by sweeping the male ferns Dryopteris felix-mas that grow at this locality SN623223; I also similarly found the moth in scrub woodland close to the railway station SN624225.
Now a brief aside: near to this point, I made a homage to see if the true black poplars Populus nigra var. betulifolia still grew alongside the Tywi by the footbridge. These had been grown from cuttings and passed on to one of the Tir Cymen staff (Tir Gofal`s preceding agri-environmental scheme); the site where they were subsequently planted by the farmer was not ideal and it is likely they will be lost to erosion in due course. 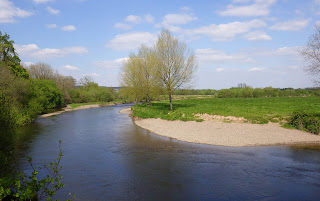 Above: the black poplars as seen from the bridge

Back to moths... I then drove to a strip of woodland NW of Cilsan Bridge below Berllan-dywyll and some distance SW of Llandeilo. I immediately found some Pachyrhabda on a few clumps of male fern west of the crossroads but thereafter, as I walked westwards, the problem was trying find some ferns as both sides of this dead-end lane were completely dominated by Oenanthe croccata. After about 5 minutes` walking, a gap allowed me to pop into some woodland SN588217, where sweeping of admixed male ferns and soft shield ferns Polystichum setiferum, yielded many individuals (c 50 or so). This site is quite close to Aberglasney Gardens.
I then drove again and stopped at the roadside above (ie S of) Gelli Aur, at Penrhiw SN590191, after spotting some male ferns. Again, Pachyrhabda was present (c 10 individuals). Two further (brief) roadside halts, at Carmel Woods and at the Pwll Edrychiad area (SN51 and SN61) failed to find any. However, we now have records for three 10km squares for Pachyrhabda - SN52, SN62 and SN51.

What do we know so far? It has obviously spread from exotic ferns at Aberglasney (on which we`d previously assumed it was dependent and confined) onto at least one native fern - Dryopteris felix-mas - and possibly another too (Polystichum setiferum). Other Dryopteris (dilatata and the affinis complex), as well as Athyrium filix-femina were searched at Carmel but none were found as, presumably, Pachyrhabda simply has n`t reached there yet (it was absent too from D. felix-mas at this site). It may be found, in due course, to utilise several native ferns.
Vaughn had his second sighting of c 100 individuals in the early evening when they were to be seen on ferns and other foliage but, during my mid afternoon visit (sunny with a breeze), they had to be swept or flushed. It seems that early evening may be the optimum time for `easy spotting`.
It is highly likely that the species is to be found at Tregib Woods (SE of and close to Llandeilo) and it may have also spread considerably westwards and northwards from Aberglasney Gardens. There are plenty of ferny lanesides and copses with Dryopteris felix-mas, a common fern on neutral soils, though D. dilatata is more common on the more acidic soils of other parts of Carmarthenshire.
It is said to fly in April (Vaughn`s first record was in early April) and May, so there is still time to find it and it seems to have survived the very frosty night and freezing conditions of about a week ago. There`s certainly potential to find more, so try sweeping your local ferns - perhaps something that is not often done when searching for springtime moths. It could be quite widespread in the Tywi Valley and perhaps even beyond - from Abergwili up to Llandovery - after all, it`s had some 15 years in which to spread, unnoticed until Vaughn`s discovery. 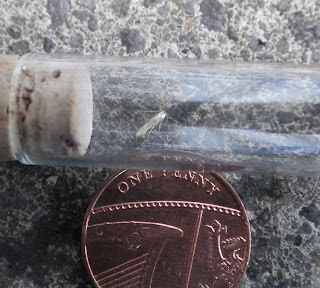 Above: showing how small the moth is - next to a penny. In fact, my specimens were all 1-2mm smaller in length than the scale bar given in British Moths. 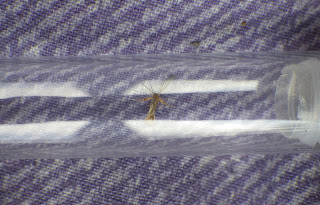 Above: another inadequate photo - the moth would not stay still! Two (of the three I took home to photo) escaped when I placed them on foliage after a night in the fridge. They remained completely still for a couple of seconds, ready for an ideal photo, and off they flew. I`ve still got the third individual in the fridge. Click on pics to enlarge.
The only other UK site where Pachyrhabda is found is at Abbotsbury Gardens in Dorset. It may be advisable for someone to alert Dorset moth`ers to investigate if it`s spreading into semi-natural habitat in that county too?
Posted by Ian Morgan