A quick afternoon visit to the wet garden...

I`ve just returned from a quick 10 minute walk down the garden as the rain has (temporarily) stopped and I chanced upon a few moths....
This seraphim (an aspen and poplar feeder as a caterpillar) had cleverly found a dry spot under some plastic, close to where my trap was last night, and one that I`d missed this morning. It`s the second individual that I`ve caught this year and -incidentally - I had two poplar greys last night too. 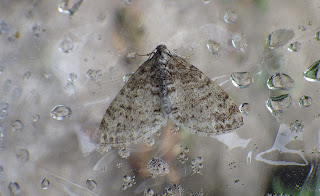 Above: `gimme shelter` - a seraphim.

Resting right on top of a leaf for all the birds to see was this clouded silver - perhaps the similarity to a large bird dropping has put them off! 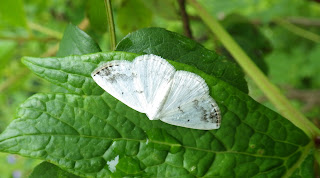 Above: looking like a bird dropping may save your life!

This Coleophora larval case was spotted on an apple leaf and whichever species it is would be a good Carms. record. It has the look of C. spinella, but it could also be C. coracipennella or hemerobiella.

*
I also caught a small stripey adult Coleophora elsewhere in the garden, which is now in the fridge, as is a Mompha, which seems to be bradleyi (which I`ve had before - dissected and confirmed by Sam); it`s also in the fridge. I`ll have to check it further though.