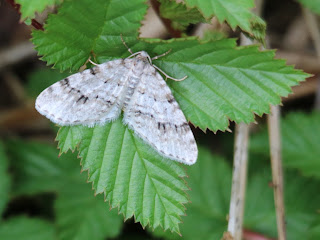 Keith Noble, from Breconshire, emailed me this photo of Welsh Wave that his partner Alison spotted near Usk Reservoir yesterday (17th April 2017).  There are only a couple of May records of this June-August moth among the 41 previous sightings in Carmarthenshire, and the earliest of those was 22nd May 2007: Keith and Alison's record is over a month early!!  The record is also new for the Carmarthenshire part of SN82, which is an exceedingly under-recorded hectad (south of Graig and east of Cwmllwyd, neither of which sites have had Welsh Wave yet) with just 35 species in total!

Keith also sent a photo of a Chimney Sweeper he photographed north of Usk Reservoir on 19th June 2015.  I am not aware of any other Carmarthenshire records of this declining moth in 2015 or 2016, so this record is very welcome.  Ian said there is a lot of Pignut in the Usk Reservoir area, so perhaps Keith's records will tempt some Carmarthenshire moth'ers to make a daytime visit with a net... 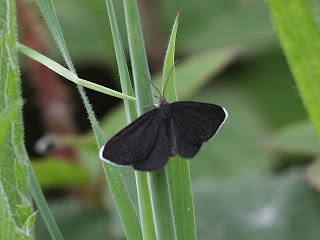