The silly season starts again, getting out of bed before dawn to inspect and collect traps left out `away from home` overnight - I`ve actually already done a little of this type of trapping previously this year, but dawn came later on those occasions!
Last night`s venue was some local woodland, with much oak - a tree that is absent from the immediate environs of my home trap site (where English elm, sycamore and poplars are more frequent, with dense stands of birch seawards). Although I do get `oak moths` at my garden traps they are local short distance wanderers rather than immediate neighbours.
Out I went with my three actinics (one of which malfunctioned...another job to sort out!), so two were placed in the woodland. Only about 15 species were present this morning, though a couple of square- spots were nice.
There was a greater variety of moths (25+ spp.) in my two garden traps, including a late dotted border, pine beauty, frosted green, mullein (again) white-pinion spotted and an overwintered red-green carpet (masquerading as an autumn green carpet). Some FFY lesser swallow prominents probably came from the afore-mentioned birch woodland. 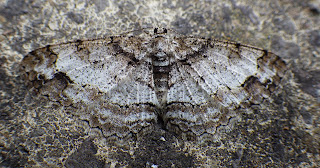 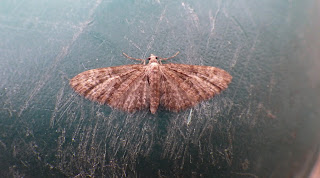 Above: I`ve got some provisional possibilities, but I`ll have to look at this pug when my brain - like my moth trap batteries - is fully recharged. In the meantime, feel free to suggest. Note the lack of a discal spot. 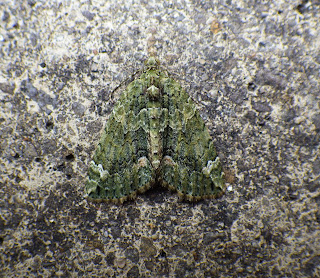 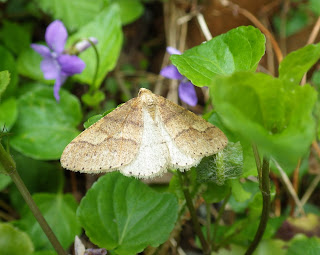 Above: does n`t he know that it`s spring? A late dotted border.

The weather looks ok for trapping tonight - have a go before the forecasted colder spell arrives.
Posted by Ian Morgan