THE LURE OF THE EMPEROR - CARMARTHENSHIRE NORTH

After placing two lures in the garden at 2.45pm today, (11 Apr 2017) a male arrived by 3.30pm but did not land; it returned by 5.00pm, where I was able to get some lovely photographs. I initially tried  the lures out in the garden end of last week, and saw it fly over several times. 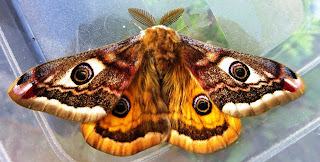