The trap in the other garden referred to in my earlier blog was inspected later but the macros (in terms of numbers and variety ) were disappointing. I did, however catch the tort shown below, which I believe is the `spruce bud moth` Zeiraphera ratzburgiana, a species that I`ve had at this same trap site before, though today`s record is an early date. This species is associated with spruce and pine and the trap was indeed placed below a semi-mature Scot`s pine. 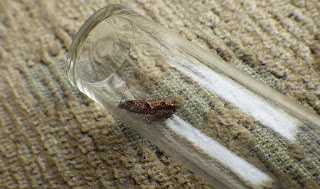 Above: I`ll try to take better out-of-tube photos once these two overactive moths settle down.

Late this afternoon, I had an hour`s walk in the woodland and open areas just east of `Ashpits Pond` in the Llanelli Millennium Coastal Park and I caught Grapholita jungiella, Ancylis badiana, Epiphyas postvittana and missed an Epinotia-type sitting on a poplar trunk (my glass tube got within 1cm of it, before it dropped and disappeared).
I was more lucky when I had to tie my bootlace in some damp willow woodland - I spotted a really tiny Elasticha right next to my boot. 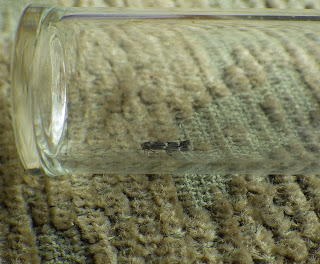 Above: Elachista sp. to be checked further.
Posted by Ian Morgan