Looking at leaf mines is normally something I do in the autumn, but there are mines to be found in the spring too. I returned today (18/4) to a small raised bog in SE Carmarthenshire, not far from Pont Abraham on the M4, the aim being to try to spot (and catch) some Eriocrania which are supposed to fly around birch in afternoon sunshine. I did n`t find any, with a few common heaths being the sole compensation moth-wise. I saw a female brimstone butterfly though, and this site has the largest concentration of native (as opposed to plantings) alder buckthorn (15+ mature shrubs) that I have seen in the county - hence the brimstones that are seen here. 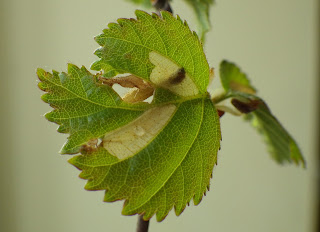 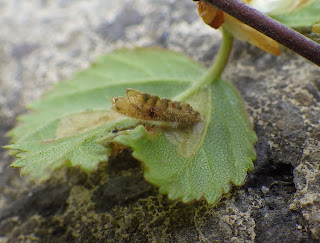 Above: I spotted some birch leaves with sections eaten out on the upper surface (top photo) and, underneath a Coleophora larval case could be seen. However, with >12 species feeding on birch I can`t say which one!

Above: one of the leaf mines collected on birch. It starts at the edge, which eliminates several species and I suspect that it is Eriocrania semipurpurella.

Above: this one has two larvae - but I suspect that it is because two separate larvae have `run together`, rather than it being Eriocrania cicatricella (which can have up to four larvae) - there is no `green matter left in mine`which is a feature of that species, so I believe that it is semipurpurella again. (Click on pics to enlarge).
Posted by Ian Morgan