Old hands will remember my notorious `glass tube shots` of micro-moths, often out-of-focus and sometimes within murky glass too - and all of them very small, even when cropped. Even so, several skilled local lepidopterists managed to aid me with identification or confirmation of those moths, and `full marks` to them for doing so with such inadequate photographs.
Anyway, progress has now been made with my `new` camera. It was actually bought way back in August 2015 but not used until today, when `techo-wizard` Nigel Stringer came over to help the `techo-moron` (me) set it up. The rest, as they say, is history and I`m sure that we can now say `adieu` to the poor quality glass tube pics of yore.
After setting up the camera, we went out to a small raised bog close to Pont Abraham (on the M4) in SE Carmarthenshire. I wanted to see if I could spot any Eriocrania spp. on the birches after Sam`s recent success in Monmouthshire (see his entry on the Mons moth blog). However, it was too cold and overcast, with no sun to entice any Eriocrania to fly and sweeping also failed to find any.
I did find some leaf mines on birch though and I believe that they are Eriocrania semipurpurella (with the mine starting on or near the leaf edge and then widening into the leaf).

I also spotted a Coleophora larval case on a short, young birch (at the nearby wooded hillside) but, even after checking the illustrations in MBGBI Vol 3, I can`t be sure which one it is - it does n`t seem to fit the Betula spp. listed. The closest I can make it to be is an oak feeder - C. lutipennella but would it be that, unless perhaps it had fallen onto the birch from oaks above? I`m new to the `Coleophora larval cases game`, so I`m not at all sure and expect to be wrong. Note (see below) that it`s quite rugose at its anterior end.
Postscript: I`ve since looked at various photos of cases and C. serratella also seems a possibility, which makes more sense, as it`s a confirmed birch feeder.

I also flushed a couple of water carpets.

Whilst practising with the camera earlier at home, I took a photo of a Caloptilia that came to the kitchen light last week but which had unfortunately expired in my fridge. Is it C. elongella? I think it`s this species as the hind legs are the same colour as the wings, rather than whiter, as they are in betulicola. 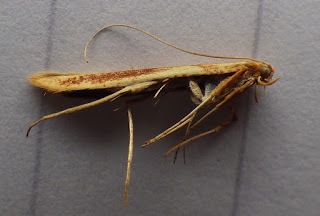 My thanks to Nigel for his help...