Don`t get your `nycteolines in a twist`...

The oak nycteoline shown below was caught last night (Fri 28/4) as part of a rather meagre catch (though the weather is better tonight, Saturday, so do try to trap if you can).
The oak nycteoline is actually a noctuid, but it looks quite similar to tortricids in the genus Acleris - another moth seemingly here to confuse us! 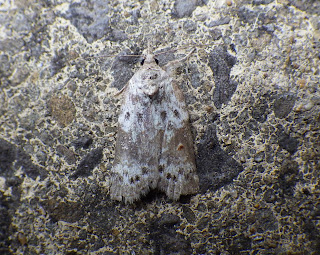 Postscript (night of Sat. 29/4): I`d left out the two garden traps from the previous night, but really it was too persistently windy and the subsequent catch was poor. The strong SE winds had brought a migrant dark sword-grass and shuttle-shaped darts were FFYs.
Posted by Ian Morgan