Ready for the rain...

In spite of the strong southerlies last night and the promise of migrants (have a quick look at `Atropos Flight Arrivals` to see what`s about) heavy and continuous rain yesterday evening - which continued throughout the night - meant that I did n`t put out a trap.
As rain is also forecast for the `put out the trap time` this evening (30/3), I`ve placed it out already in a sheltered spot in the garden, rather than on top of the flat roof where I sometimes put it when migrants are hoped for. Heavy rain is also predicted for part of the overnight period, so I`ve added some plastic panes (off another trap) on top of my usual pane of strengthened glass, to keep the rain off the MV bulb. If anything of interest is caught, I`ll add to this blog or do a new one. 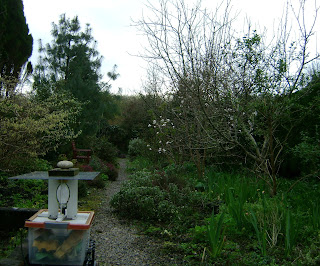 Above: ready for the rain and ready and waiting. `Fingers crossed`!

Update: Heavy rain showers until c 7.30 am deterred me from examining the trap earlier this morning and, once I did,  I could see that there had been some bird predation of those moths outside the trap. Within the trap however, the moth numbers were actually good, albeit of 10 mostly common macro species (no micros were in the trap). The best capture was a pine beauty and several early tooth-stripeds constituted FFYs.
Posted by Ian Morgan