Over the weekend, I had an email from Rosemary Royle of Pembrokeshire, asking me to suggest a good site not to far from Cross Hands (which she had to visit) where there was a good chance of seeing an orange underwing. I recommended Mynydd Mawr Woodland Park, Tumble, which was not only close to Cross Hands and had much young birch scrub, but where there also had been a series of sightings in recent years.
Today, I visited the same site, arriving at about 1.00pm or so. I walked a route along the sheltered south-facing plantation edge where much birch of various ages thrives, as well as on several acres up-slope.
Carefully looking as I walked, and searching locations where I`d seen them before, none were to be seen. Returning to the car, I noticed two people looking with binoculars at birch tops and approaching them it transpired it was Rosemary and her husband. I`d assumed that they`d visited a day earlier on Sunday (a better, warmer day).
I told them of my lack of success, advised them further and left to return to the car. Again, even though I was looking carefully, I failed to see any orange underwings. As I approached the end of the birchy wood edge, I remembered that there was one clump of birch trees where I`d had orange underwings on previous occasions after similar lack of success. Well, I did n`t see one there but I did have a sighting just before that location, when one flew quite low down to visit willow flowers (at c 10ft), giving me about 30 seconds` worth of `good views` and enabling me to view the wing colouration against a dark background (often the moth is just a silhouette against a blue sky). It then flew off, at some height (c 20ft) across a wide space to some birch trees upslope.
I quickly returned to Rosemary to tell her about my sighting and left again to go home - I hope that she eventually saw one! 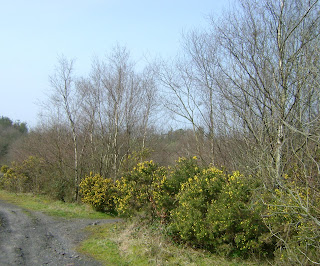 Above: the orange underwing was on the barely-flowering (and hardly discernable in the photo) Salix cinerea on the right-hand edge of the photo.

I also saw a female brimstone butterfly in the garden at Pwll this morning, and a comma and a peacock were seen whilst searching for orange underwings.
Posted by Ian Morgan