Keeping up with Vaughn...

Dual-county moth enthusiast Vaughn Matthews traps quite regularly during the week in Glamorgan (mostly due to the location of his work) and also on occasion in his home county of Carmarthenshire on the weekends.
Earlier in the week he trapped at Parc Slip in Glamorgan, catching a modest number of seasonal moths, including yellow-horned, a species associated with birches. The weather forecast last night (3/3) was fairly suitable, so I put out one trap in the garden at Tyrwaun, Pwll.
I had 8 species of moth, including my target - yellow-horned - with the rest being March moth 1, oak beauty 1, pale brindled beauty 1, common quaker 6, twin-spottted quaker 1, Hebrew character 2, and a Caloptilia sp. (to be looked at later). I had 3 yellow-horneds, probably emanating from extensive birch scrub to the south of the garden (or from a nearby hillside). 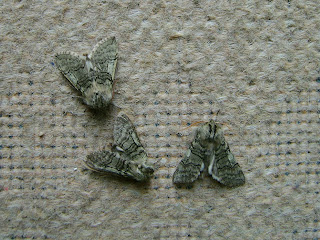 Above: the yellow-horneds, brought indoors due to a heavy shower. Note (click on pic to enlarge) the yellow antennae (the `horns`). 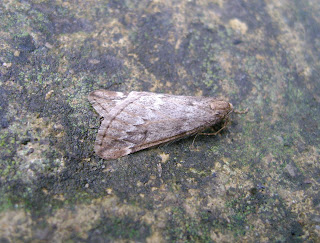 Above: the distinctive March moth, phot`d outdoors, before the rain came! 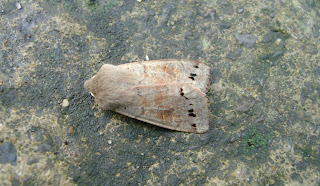 The mothing season has started so, if you wish to catch the early season moths, consider dusting off your traps and put them out on appropriate nights.
Posted by Ian Morgan