Almost two thirds of all the moths trapped at Cwmllwyd so far this year were captured last night (Sunday),  including over half of the species seen, as well. Most of these were common spring macromoths that have already been reported on this website several times by other observers, although several were FFYs for Cwmllwyd. There were just three species of micros found: a single Agonopterix heracliana, Caloptilia stigmatella x2, as well as two Diurnea fagella - a species new to me. 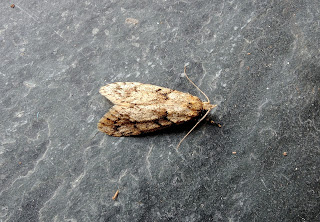