The moth numbers were significantly up last night with the overcast and almost windless conditions; unfortunately the forecast was not quite accurate as the rain was originally supposed to stop by the 6.00am - 7.00am slot, when I checked the two traps. In fact it was quite a dense, soaking drizzle - I don`t mind the traps or the moths getting wet, but me?
Fifteeen species were recorded (roof-top actinic and garden MV): early grey 9, hebrew character 4, satellite 1, oak beauty 1, brindled pug 2, dotted border 3, common quaker 7,twin-spotted quaker 1, clouded drab 11, pale pinion 1, engrailed 1, chestnut 1, March moth 8, brown house moth 1 and a Caloptilia (to be checked later). Incidentally, I`ve had two species of Caloptilia already this year - C. betulicola (with white hind-legs) and C. elongella, with brownish hind legs. 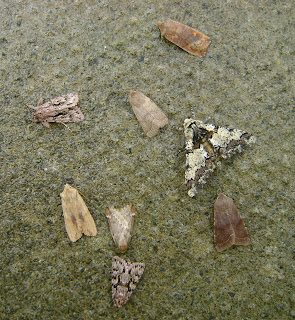 Above: some of last night`s moths (the others were too restless or had already been disposed of); clockwise from the top - satellite, common quaker, oak beauty, clouded drab, early grey, March moth, pale pinion and another early grey.

I`ll be trapping tonight to take advantage of the mild weather and southerly winds.
Posted by Ian Morgan