My plans to target lead-coloured drab at an extensive aspen stand E of Burry Port last night (11/3/17) were thwarted by a large group of revelling teenagers having a noisy night-time party close to my intended trap site. It would have been too risky to have left my traps which, at this time of year, would n`t have been obscured by vegetation. Instead, in darkness, I moved the two battery-run actinics to other areas within young planted woodland in the Millennium Coastal Park.
Returning at dawn this morning I was lucky to get the two traps in before any significant rain. One trap was without light, the battery having run out at some late, pre-dawn stage; the other still glowed brightly at 6.30am. Unexpectedly, the latter had only two dotted borders - probably because it was a cooler night and it was placed in an open area.
The other trap (the one whose light had expired) was placed within mixed young deciduous plantings and had rather more moths - 2 early thorns, 4 dotted borders, 3 engraileds, and 12 Diurnea fagella. There was also an oak nycteoline, a diminutive noctuid. I nearly made one of my annual mistakes and initially thought it may have been a tortricid. 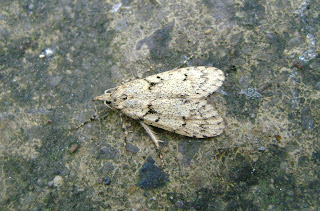 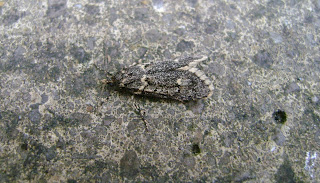