(Quite an) Early Grey 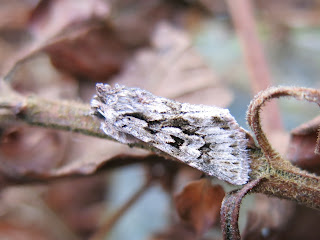 The Cnwc MV produced two more firsts of the year last night - March Moth (which Ian has already seen at Pwll) and Early Grey.  The latter species had only 4 previous February records from Carmarthenshire, and is only beaten by one on 16/2/2007 at St Clear's Rothamstead.  Frustratingly the birds have now re-learned to spot my MV, and there were a few wings around the trap.  Again only 1 moth was actually in the trap, with the rest of the 9 species scattered around.
Posted by sambbryo