No migrants, and few moths...

As I`d trapped for the previous two nights, I again left the trap out last night (Thurs 8/12) as it was predicted to be the last night of strong southerlies and perhaps enabling me to have a last-ditch attempt to catch something `good`.
There was not much I`m afraid - an angle shades, one winter moth, an early common quaker, and singles of  feathered thorn, red-green carpet and Epiphyas postvittana. No mottled or scarce umbers at all; neither was a single December moth present. It`s amazing what a couple of nights` difference can make in moth numbers - I had 18 December moths on Tuesday night and Steve Clarke had much more at Cwmllwyd. Even larger numbers were caught elsewhere - for example see the Ceredigion and Somerset moth groups` blog links for some quite astonishing counts of this species. 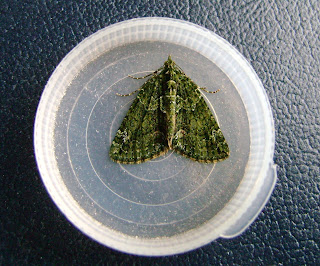 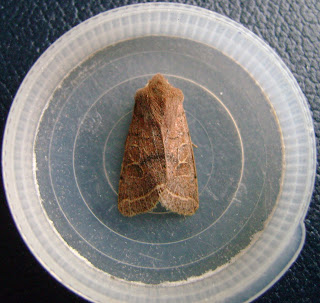 Above: common quaker - an unseasonal individual: you`ll catch plenty of these, come late February and March!
I`ve put my traps away now, before tonight`s heavy rain.
Posted by Ian Morgan