Last week`s opportunity, on a cold day of heavy rain and strong winds, to read old issues of the Glamorgan Moth Recording Group`s Newsletters has suggested several species to look for during this coming winter/early spring period. In the April 2000 issue (No. 41) is another interesting article, this time written by Mike Powell, on how to find the firethorn leaf miner Phyllonorycter leucographella, which in January of that year was new to Wales, having been found by Dave Gilmore in Roath, Cardiff. Not long afterwards, Barry Stewart also had it elsewhere in west Glamorgan, at Llanelli and he also found it or confirmed it (I can`t remember now!) from a firethorn Pyracantha sp. growing in a large pot in front of my Pwll home.
Anyway, reading Mike`s article last week prompted me to check, when I had  chance, a very large Pyracantha bush (c.15ft x 15ft) that is growing in my garden; the other bush in front my house I`d heavily pruned about a month or so ago, so it`s lacking foliage and is currently unsuitable.
In Mike`s note he wrote, `...most leaf-mining activity occurs January to March...[with the larva] making a linear mine along the central vein...[and] it then proceeds to make an oval mine, which shows as a silvery-brown blister in the centre of the upper surface`. After a short time, the caterpillar draws in the mined leaf together to make a `pod` prior to pupation.
This afternoon, I ventured out to check my huge firethorn. Most of the foliage was very difficult (and very thorny!) to reach, but I managed to collect some leaves which are shown below. It might be worthwhile checking firethorns elsewhere in Carmarthenshire, in gardens or in amenity plantings. 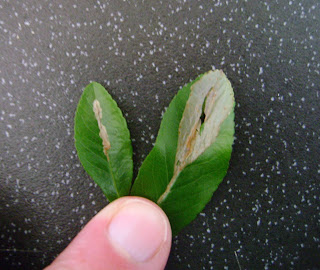