December moths live up to their name...

Until I saw Steve Clarke`s amazing total of 38 December moths (see his earlier blog), I was pleased with my total of 18 of the same species in my garden traps at Pwll last night (6/12). Normally, I record ones or twos of this moth which many people miss as they do not trap on suitable winter nights.
I was pleased though, with a new macro species for my well-trapped home site -  the two scarce umbers which graced my trap this morning; it is another moth that is missed by non-winter moth`ers.
I was prompted to trap last night by the forecast of strong southerly winds and the hope of migrants. One migrant species did turn up - a solitary rusty-dot pearl and the prediction of continuing southerlies tonight and tomorrow night will make trapping worthwhile. The Met Office`s announcer on the BBC News mentioning `winds from the Azores` certainly whets the appetite and `ups` the `moth potential`, so please do try to trap for the next two nights - similar winds last winter brought rarities (see the late November/December blogs for 2015 in the `resources` section to the right-hand side of the Carmarthenshire moth blog home page). Tonight (Weds) and tomorrow (Thurs) are your best chance - it`ll be too late by the weekend, when the winds turn north-westerly.
My modest totals for last night were: 18 December moths, 1 rusty-dot pearl, 4 feathered thorns, 7 mottled umbers, 1 red-green carpet, 1 satellite (with one deformed wing), and 2 scarce umbers. 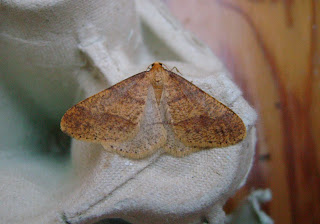 Above: what I believe is a scarce umber; two were caught. 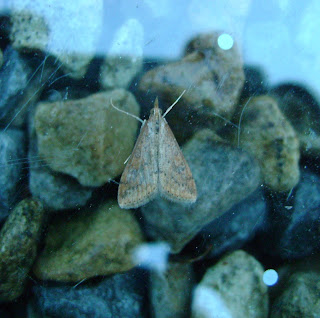 Above: a blurry shot of last night`s rusty-dot pearl, resting on the pane of strong glass (ex-refrigerator) that I used to cover my MV bulb.
Posted by Ian Morgan