It was Barry Stewart`s `fault`, for writing some very interesting articles in older issues of the Glamorgan Moth Recording Group`s newsletters, with one article discussing a New Year`s Day hunt (in 1999) for Coleophora maritimella on the north Gower saltmarshes - in horrible wet and windy weather as it happens. I thought that I`d have a go too, but perhaps more sensibly choosing better weather for my trip.
My first search, on the afternoon of Christmas Eve, to the saltings at the mouth of the Afon Lliedi at the North Dock, Llanelli failed completely as the host plant, Juncus maritimus was absent. So, yesterday (Boxing Day) I tried again, in sunshine and blue skies, visiting Pembrey Saltings and the old harbour area at Pembrey where it (unfortunately) seemed that the whole world was out, with children walking their new dogs or riding brand-new bicycles.
At Pembrey Saltings, I made my way to the ungrazed upper saltmarsh section, beyond the perimeter fence of the grazing compartments. Emergence holes were plentiful in Juncus maritimus seed heads and I collected about twenty or so to take home for further examination. I also found white Coleophora capsules on the much smaller Juncus gerardii (at one spot only) too; later more J. maritimus with emergence holes were discovered at the NE corner of Pembrey Old Harbour.
Back in 1999, Barry laid out the seed heads with emergence holes that he`d collected onto a sheet of white paper to await the larvae making an appearance, which they duly did, but there was no such activity with mine - nor could I find any indicative silken collars at the entrance to the holes. So, with my collection, it is perhaps just an indication of possible Coleophora maritimella presence at Pembrey, rather than confirmation.
With the white larval cases on the Juncus gerardii, a check was made in the Moths and Butterflies of Great Britain and Ireland, looking at the text for each potential species and the excellent plates of larval cases. Of the species that are said to occur on Juncus gerardi, both C. maritimella and C. adjunctella use empty seed cases, so it was n`t those two species nor was it C. caespititella which has a greyish-brown (rather than white) case. MBGBI does not list J.gerardii as a host plant for another of the white larval case species - C. alticolella. Presumably therefore, my white cases are likely to be the common and widespread C. glaucicolella, which can occur in many wetland habitats. 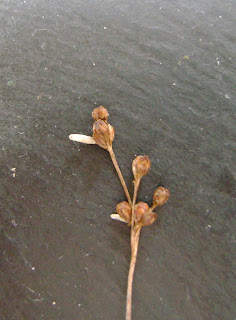