As it was quite windless and overcast last night (22/11), I placed my mains actinic on the flat roof at Tyrwaun, Pwll to see what was around, and in the unlikely hope of catching a sprawler (I did n`t catch one).
It was worthwhile though, in terms of helping record the full spectrum of moths that occur in the area, as the total catch was of four, mostly late autumn/winter-time, species.
I had 3 feathered thorns, 1 December moth, 1 winter moth and 15 mottled umbers. Of the latter, 13 were high on the pale-painted house wall and out-of-reach (though clearly visible) unless I hauled a ladder up onto the extension roof. There were 13 moths to be seen at first light but only one left five minutes ago - various tits probably have predated them. They were the `unlucky thirteen`; but two more were safe in the trap, one well-marked, the other less so and they both appear in the photo below. 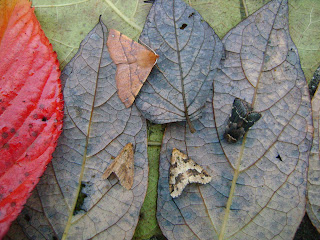 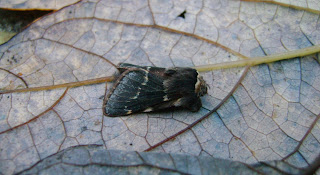 Above: I find that you have to trap late in the season to catch the darkly-handsome December moth.
Posted by Ian Morgan