Calling all Carmarthenshire Moth'ers - please look for mines of Ectoedemia subbimaculella on your patch!  This is a really distinctive leaf miner and seems to be on most Oak trees at the moment, but there are only 9 Carmarthenshire records and none of them comes from the home 10km squares of our most active moth'ers.  Now is the perfect time to record this species, because it forms 'green islands' on Oak leaves, so all you need to do is search on fallen leaves (although it is often easier on low-hanging branches).  It forms a flat blotch mine: with no creases (like Phyllonorycter) and no linear frass (like Stigmella).  Uniquely (among S Wales miners) it makes a hole at the base of the mine, out of which the frass falls.  Since I posted pictures on the Gwent Blog I have had records from two new recorders, so please find some in Carms!  This photo comes from Brechfa today. 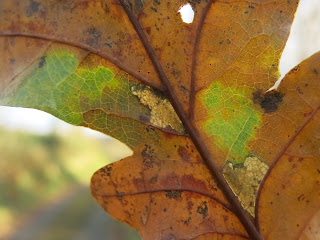 Linear Stigmella mines on Oak are more difficult, but two species seem to be pretty frequent in green islands. Stigmella atricapitella is pretty ubiquitous, and is identified by dark 'sclerites' that project back from a dark head. Stigmella roborella has no previous Carms records, but I saw it today at Cnwc and have found it several times recently in Monmouthshire; it has a pale head and no projecting dark sclerites, and its mines are smaller (they started later) than those of S. atricapitella.  Earlier in the season, two species with scattered frass (S. svenssoni and S. samiatella) were frequent in Monmouthshire; these are tricky/impossible to tell apart so IDs are provisional.  Stigmella ruficapitella seems to be remarkably infrequent this year, despite lots of records in 2008.  Many experts consider these 5 miners impossible, so all IDs are tentative but indicate the frequency of particular frass forms. 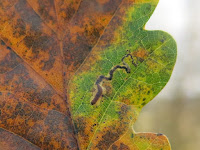 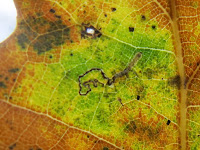