There were only four moths in the garden trap this morning, perhaps predictably after a rather cool night with, at times, blustery wind and prolonged heavy showers. A rush veneer represented the migrants, there were two common marbled carpets and the fourth moth - a cypress carpet - was the best, making the effort worthwhile.
I have had this species a couple of times before at Pwll and Colin Jones also previously caught it (as a new county record) at Troserch, Llangennech. As well as the two 10km squares in SE Carmarthenshire where it is now recorded, it ought to occur in gardens, parks etc with cypresses elsewhere in Carmarthenshire. 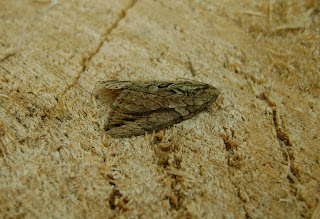 Above: not long out of the fridge (hence the partially-closed wings). I then left it for a few minutes, so that it could `relax` and open its wings - which it did. But, as I approached it to take some more photos, off it went and, as bad luck would have it, towards a small open window from where it flew out to the garden!
Posted by Ian Morgan