Not much last night...

I had the two garden traps out last night (29/10), but there were no nice surprises among the c 13 species present. Five silver y`s suggest some moth movement and a buff footman turned up again (perhaps the same moth as the night-before-last). 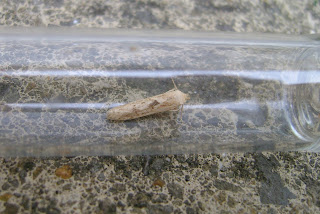 Above: this rather late Blastobasis lacticolella was in one of the garden traps last night. Blastobasis adustella is far more frequently caught in my traps. One of my awful `moth in a tube` photos - click on it to enlarge.

I also had two mobile actinics in local woodland and one at an allotment site, but both just had the usual seasonal moth mix (with 7 and 10 spp. respectively).
I`ll leave the garden traps out tonight, as they are both set up and ready, then I`ll have a break.
Posted by Ian Morgan