Last night (25/10) proved to be not a bad night for moth trapping, with 24 species recorded at my two garden traps at Pwll, Llanelli. There were three migrant species (silver y, rush veneer and diamond-back moth, all singles) but nothing particularly exciting in that department. However, I was surprised to have a buff footman in the trap and I initially speculated to myself whether it too might be migratory or just a bit `out-of-season` (or even something else).
Another cypress carpet was caught and it pleases me that I have, in season, several cypress-dependent species in my garden (or my neighbours` gardens) - cypress pug and the two micro-moths Argyresthia trifasciata and cupressella, as well as the long-resident Blair`s shoulder-knot of course.
FFY for me last night was a feathered thorn and the five yellow-line quakers in the traps were also a personal FFY, though I know that others have previously caught this moth.
My full list (excluding the three migrants mentioned in the first paragraph) was: red-green carpet, large wainscot, sallow, yellow-line quaker, red-line quaker, buff footman, November moth agg., snout, green brindled crescent, LYU, grey pine carpet, common marbled carpet, garden carpet, cypress carpet, angle shades, feathered thorn, black rustic, beaded chestnut, merveille du jour, chestnut and light brown apple moth. 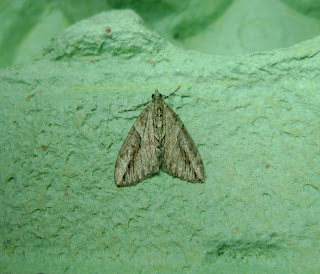 Above: cypress carpet showing the diagonally-streaked wings that makes it easy to identify. 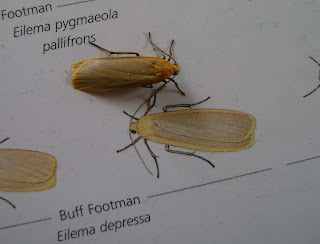 Above: what I assume is a buff footman, though it is slightly smaller. 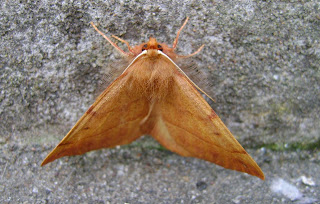 Above:  a feathered thorn showing its `feathered` antennae. 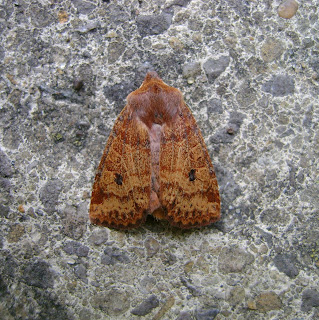 Above:  a well-marked chestnut to complement Steve`s dark chestnut.

Please do trap if the weather conditions are suitable - a lucky blighter may even catch a sprawler!
Posted by Ian Morgan