.....Well, I tried again last night (Tuesday) with the MV at Cwmllwyd, in the alder grove where tall trees act as a windbreak. This worked very well early in the evening and several moths were seen flying, so out came the net. The tally only reached 23 individuals all night, with a mere 13 species found and only one FFY - November Moth agg. And yet, I rate this as a success, for among those netted was a target species for the site: 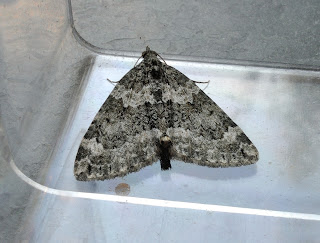 Autumn Green Carpet - first for the season. Awful indoor shot; I took the moth outside in bright sunshine later to capture the delicate colours, whereupon it immediately flew away! The moth was caught as early as 7:50 pm. 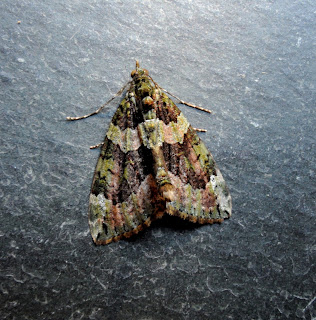 In the trap was its cousin, Red-green Carpet, also first for the season, both species having been recorded during spring after hibernation. 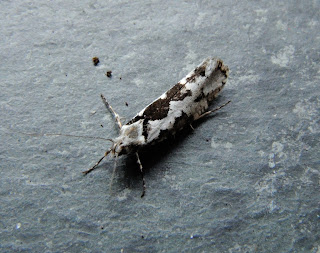 Ypsolopha sequella was only the second one seen here, following one recorded last month.
Posted by Steve Clarke