A few migrants that haven't migrated

Since it seems to be fairly quiet just now, perhaps I can be forgiven for describing a few moth encounters during last week spent at my son's holiday establishment in the Charente-Maritime region of SW France.  Walking along the byways which run between extensive plantations of vines, sunflowers and maize, I noticed several Vestals and Rush Veneers fluttering in the grass verges. It was a surprise to see them on the wing during the day.  Since our Vestals are presumably blown over from Continental Europe, perhaps it's not surprising that they are quite common there.

This Meal Moth alighted on the arm of my chair one evening.  At first I didn't recognise it, having not seen one for many years.  It's a very pretty moth, such a shame that it doesn't seem to occur hereabouts. 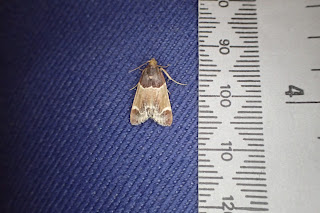 A Hummer visited the garden in the late afternoon to nectar on the Salvia flowers: 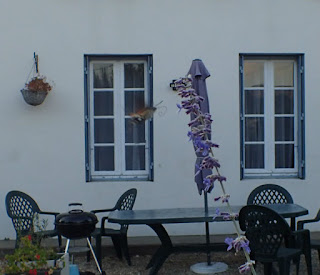 It was interesting to speculate on whether this moth, which I saw on several consecutive days, was a single individual with a set routine of visits, or whether I was seeing a different moth on each occasion.

This moth also appeared on a shrub in the garden: 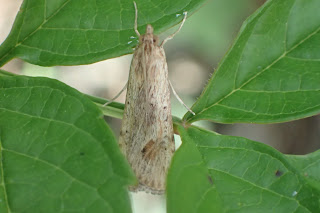 It was about the same size and shape as a Rush Veneer, and maybe that's what it was, but the brown patch on the forewing at about two-thirds seemed distinctive and not like RV.  Scrutiny of on-line images points to RV, some lighter individuals have rusty markings on distal parts of the forewing.

I've just seen a weather forecast which supports Ian's view that tomorrow (Tuesday) night seems the best bet for trapping.  Maybe I'll leave a small actinic trap out tonight though, just in case there's anything around.