I trapped at my parents on monday night this week but have only just got around to getting photos off camera so apologies for the delay. The night started clearer than forecast but the trap was busy in the morning (though mainly with midges and brimstones) with 161 moths of 49 species in total. The highlight for me if it is confirmed was a hoary footman - it'll be a new moth for for me if that is indeed what it is: 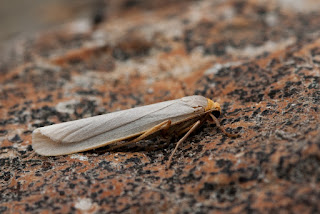 There were a couple of migrants in the form of silver Y and rush veneer and other nice moths were august thorn, pebble hook-tip, oblique carpet, flame carpet, angle shades, sharp-angled peacock and a couple of late(?) clouded border. 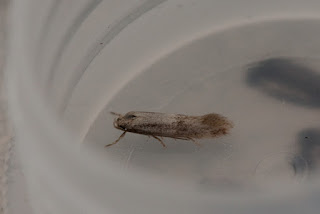 Non-moth interest was provided by 7 Nicrophorus investigator which thankfully (and surprisingly) weren't too pungent...