Every vestal makes the moth news...

...especially when they are the subject of rather shabby treatment and neglect, such as the unfortunate individual shown below. It was caught on Tuesday night (6/9) but, by yesterday morning when it was photographed, it had sadly succumbed though all the other moths in the same refrigerated `batch` were fine and have mostly now gained their freedom after identification etc. 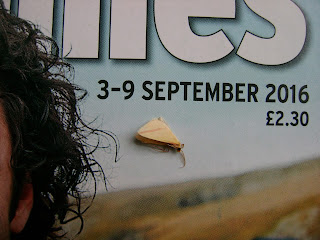 Above: my second recent vestal, with a slightly darker stripe than the one caught on 26/8.

There were fair numbers (c 20 or so) of silver y`s in the trap on Tuesday, but less on Wednesday (7/9) when two dark sword grasses turned up. 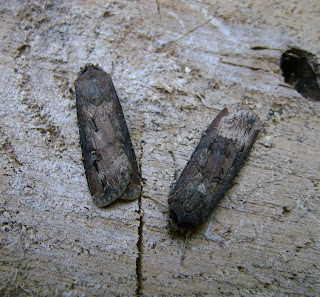 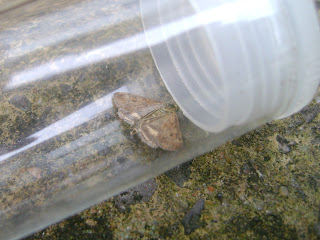 Above: this Pyrausta despicata was probably wind-blown from nearby coastal grassland on Weds. It escaped as I placed it on a more appropriate background for a better photo. 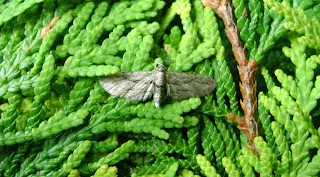 Above: on Wednesday, I placed one battery-fed actinic next to some cypress trees close to the bottom of my next-door neighbours` garden and was rewarded by this cypress pug, a moth which I`ve recorded before in the same spot. I also had a cypress carpet at the same location earlier this year. 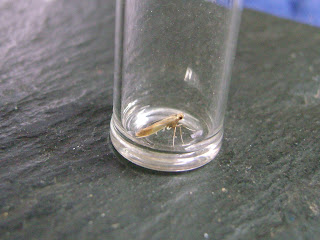 Above: I was pleased to catch this micro, which I believe is Caloptilia azaleella. I had deliberately planted some Azaleas in the hope of attracting this moth and it seems to have worked. It is quite smaller than the other Caloptilia spp.
Postscript: I`m a bit unsure now that it is azaleella - it is certainly small but its markings are n`t fool-proof. I`m keeping the specimen for now and I will update/change this paragraph in due course. See Comments section below. 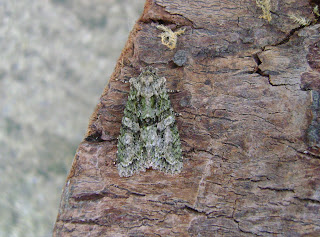 Above: On Tuesday, I also left a mains-fed actinic in the garden of my late parents` house on the western outskirts of Llanelli (right next to Stradey Woods). I was again pleased to catch this moth, a brindled green, which I don`t think I`ve caught before perhaps because that I have not trapped frequently enough in `oakey` situations at the right time of the year. New Carmarthenshire moth enthusiast Jane Hand at Rhandirmwyn (where there`s an abundance of oak) has also caught a brindled green recently. 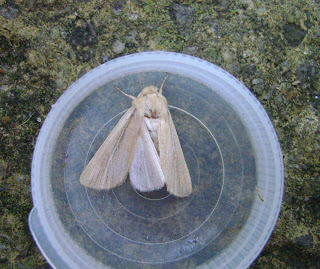 Above: I also caught this wainscot at the latter site. I thought on immediate inspection that it might be a smoky wainscot but it did n`t `look right`. Checking of the hind wings suggests that it is a common wainscot (not particularly common in Carms) with pure-white hind wings.

I`ve still got some other moths to check from Tuesday and Wednesday nights but the sprinkling of `good` moths among the hordes of large yellow underwings demonstrates that there`s still plenty of (moth) life left in the 2016 season.
For those of you who have noticed, apologies for the play on `empty vessels...` in the title!
Posted by Ian Morgan