The end of summer is in sight...

Just as the noisy flocks of black-headed gulls (and with plenty of Mediterranean gulls these days) building up on the nearby Burry Inlet and other local estuaries, the changing assemblage of moths indicates that autumn is approaching. Rosy rustic, flounced rustic, six-striped rustic and Svensson`s copper underwing being among the FFYs last night (15/8) here at Pwll. There was a fair mix of moths and micros were also out in reasonable variety too such as two species of Swammerdamia - pyrella with its coppery wing tips and S. caesiella, grey with a dark cross band (and no coppery termen). The first-named is probably based in my fruit tree-rich garden whereas caesiella has come from just beyond the garden, from the birches at Pwll Lagoon SSSI. I`ll be keeping the caesiella specimen to be checked/confirmed later, as there are only three records on Sam`s 2013 list and only six given in The Moths of Glamorgan. The latter location is also probably the main source of the 50+ water veneers, 25+ ringed china marks and a similar number of small water boatmen in last night`s trap. 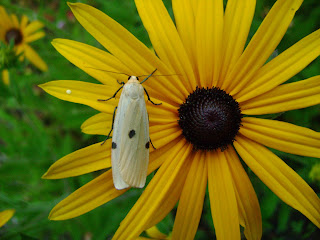 Above: female four-spotted footman, one of two seen (the other was a male). 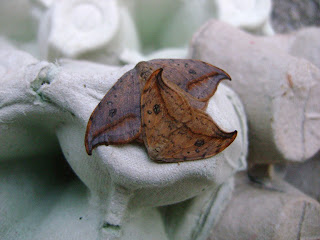 Above: two pebble hook-tips, found like this in situ in the trap.