Like Chris, I too trapped last night and similarly, whilst the numbers and variety (c 55 spp.) were good, there was nothing hugely exciting in the catch. Of moderate interest, a scruffy old lady turned up (I`ll avoid any puns!) but it was not up to a photograph or two, scuttling quickly off into vegetation after I`d taken a very poor photo.
I paid a short visit to a local allotment yesterday afternoon in the hope of finding a leek moth Acrolepiopsis assectella, or signs of its feeding, but I failed. Chris Manley has had it not far away in Glamorgan and I`d hoped that it had reached Llanelli. I`ll have to wait.
In the tiring heat, I made a short walk along the banks of the urban Afon Lliedi noting some leaf mines en route, thinking that I`d better do some practical `swotting-up` before the leaf mine course at Cilgerran next month.
Several leaf mines were found including what I think is Phyllonorycter quercifoliella on oak, it being thought to be this species rather than the similar mine of P. roboris as the former has a single crease (visible in the photo below) in the lower epidermis of the oak leaf. 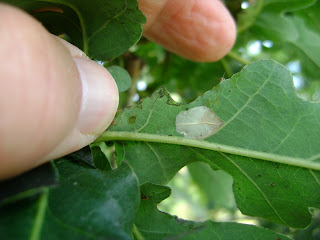