With the southerly winds last night I`d hoped for some migrants. Some species of interest have been turning up in Cornwall and elsewhere in SW England in recent days (as opposed to SE England, which has had the lion`s share of good migrant records this year). In the event, my only migratory moths were eight silver y`s (not bad in a year when this species has been locally scarce) and a solitary rush veneer. I actually `waited out` with my (flat) roof top MV last night, until midnight, when it started to `pick` with rain but the heavy overnight rain did not materialize until c 9.00am this morning, making me wish that I`d left it out overnight. A problem with my flat roof is that heavy rain causes `puddling` on the relatively smooth surface, drowning or otherwise `spoiling` the moths. Recently, I`ve been putting out a piece of old carpet (c 6ft x 6ft or so) under the trap and this considerably reduces this puddling problem. Either use some old carpet of your own or get some from the local recycling centre or just buy an `off-cut`.
Last night`s moths were the usual assemblage but with a nicely-coloured yellow-barred brindle, a brindled plume Amblyptilia acanthadactyla and a new adult moth for me - the tiny but easily-identified Coptotriche (Emmetia) marginea, better-known by its common blotchy leaf-mines in bramble leaves (no photo of the moth - it`s too small for my camera!). 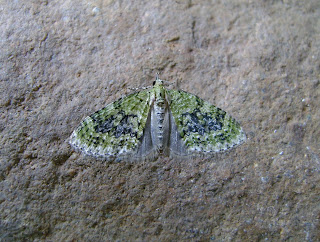 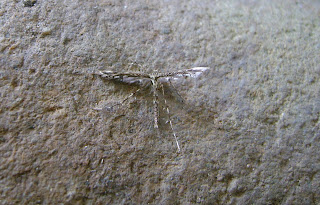 Above: brindled plume - this one would n`t pose neatly!

Above: Blastobasis adustella is a common micro around Llanelli. Note the `v` mark on the back of this darker individual. I also get - less frequently - B. laticolella. Click on pic to enlarge.
Posted by Ian Morgan